D. Sue Vernon
Jean B. Schumaker
Donald D. Deshler
Controversial issues abound in life. Should the money be spent on the library or the park? Does the town need a new shopping center or office complex? Should smoking be allowed in public areas or not? And what about the football coach? Should he be fired or given another chance? Groups of people face these two-sided issues every day, at work, at home, in committee meetings for charity organizations, and on city councils. Making a decision on these issues can be tough because different people are invested in each side of the issue.
One of the more helpful tools that students can be given to prepare them for such decisions is the BUILD Strategy, a simple strategy that enables them to work together to resolve controversial issues. Specifically, the BUILD Strategy enables students to break an issue into its sides, gather information so they thoroughly understand each side, identify possible compromises and their consequences, and finally, reach a group decision about the issue. As they use all the steps of the strategy, they also use the SCORE Skills, the basic social skills for all effective cooperative groups.
This manual contains step-by-step instructions on how to teach the BUILD Strategy. The first lesson provides instructions on how to review the SCORE Skills with students. Each subsequent lesson focuses on one step of the strategy. Students learn about the step, watch a demonstration of the step, and practice using the step. Cue cards, role-play activities, and worksheets are included at the end of the manual to be reproduced and distributed, so students can practice and master the strategy. For a glimpse of the program in action, see The BUILD Strategy Professional Development Workshop.

Research on the BUILD Strategy 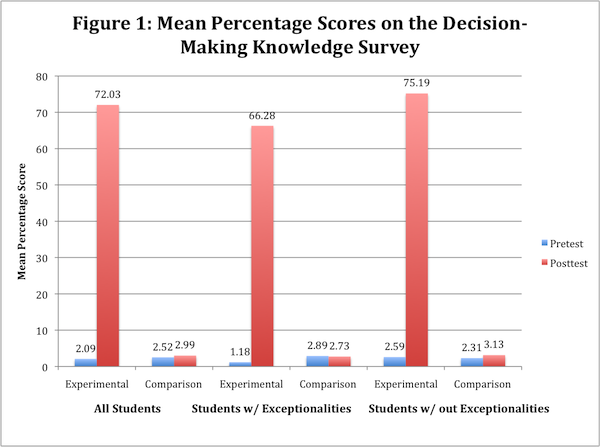 Data were also gathered on the students’ performance as they resolved two-sided issues in small groups during the pretest and posttest. Since students with and without exceptionalities worked together in these groups, analyses were conducted on the combined group means. Observers determined the percentage of strategy steps the students used. The ANCOVA revealed a significant difference between the experimental and control group posttest scores, F (1, 23) = 68.53, p < .001, η2 = .77, representing a very large effect size. The adjusted posttest mean for the experimental group was significantly larger than the adjusted posttest mean for the control group. (See Figure 2.) 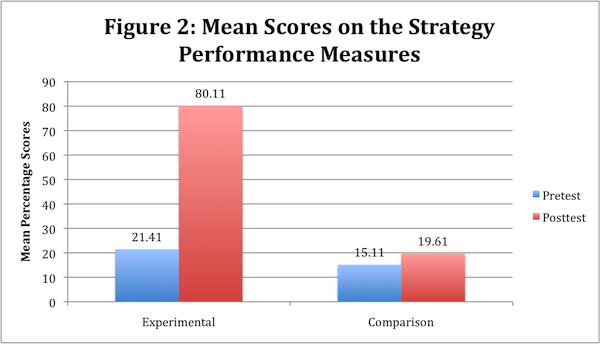 Conclusions
The BUILD Strategy instructional program can be successfully used to increase student knowledge about resolving issues and to teach students to resolve two-sided issues in small cooperative groups. Both teachers and students were satisfied with various aspects of the program. 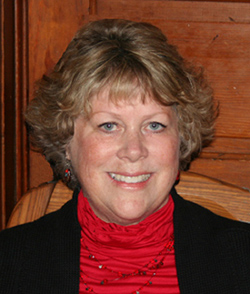 My Background and Interests
By wearing my different hats (a university instructor, a certified teaching-parent, a trainer and evaluator of child-care workers, a SIM professional development specialist, a parent of three children (one with exceptionalities), and a researcher), I have gained knowledge and experience from a number of perspectives. I have a history of working with at-risk youth with and without exceptionalities (e.g., students with learning disabilities, emotional disturbance, behavioral disorders) in community-based residential group-home treatment programs and in schools. I also have extensive experience with training, evaluating, and monitoring staff who work with these populations, and I have conducted research with and adapted curricula for high-poverty populations. In addition to the Build Strategy program and other Cooperative Thinking Strategies programs, I’ve developed and field-tested interactive multimedia social skills curricula, community-building curricula, communication skills instruction, and professional development programs. I have also developed and validated social skills measurement instruments. As a lecturer of graduate-level university courses in the Department of Special Education at the University of Kansas, I have taught courses designed to enable teachers to access and become proficient in validated research-based practices.

The Story Behind the BUILD Strategy
My focus for the last 30 years has been on helping youths learn, and especially on helping them learn how to use social skills. My interest in social skills instruction began when I was a teaching-parent in a group home for adolescents who had a history of social problems. Clearly, those youths had not learned the social skills they needed to be successful in today’s world. Nevertheless, experience showed they could learn to use social skills well, given the right type of instruction. Later, I was the co-founder and Director of Training and Evaluation of the Teaching-Family Homes of Upper Michigan, originally developed through funding from the Michigan State Department of Mental Health and Father Flanagan’s Boys Home. This new agency eventually provided services to over 1,000 youths per day in schools, residential group homes, regional treatment centers, treatment foster homes, schools, and in counseling centers. My primary responsibility in this position was teaching adults (e.g., parents, teachers, foster parents, counselors) to teach social skills to children, and everyday I witnessed these adults successfully teaching the various skills to the youths in their care. Unfortunately, the population receiving instruction was often children who were already involved in the juvenile justice “system.” They were in trouble and had been removed from their homes. As I watched their growing success, I wanted to find a way to introduce social skills instruction as a way to preventsocial problems – I wanted to teach children alternative ways of behaving that would help them not only to stay out of trouble but also to create and maintain relationships. I thought the perfect place to prevent problems would be in the general education classroom beginning in elementary school.

As a result, a whole line of research on social skills instruction was born. During early research efforts, I began observing and recording social interactions as students worked in cooperative groups on different types of tasks (and I was appalled at how the students treated one another – especially how other students treated students with exceptionalities). I surveyed teachers and found that they actively supported social skills instruction and were looking for ways to enhance productivity in cooperative groups. They had specific types of tasks in mind that they wanted their students to complete. For example, they wanted their students to learn how to work together to resolve a controversial issue. Thus, my colleagues and I developed and tested the Build Strategy program in general education elementary classrooms. Our goal for the Cooperative Thinking Strategy Series was to develop programs that could be used in general education classes and that would benefit students with and without exceptionalities. We wanted students to learn ways to cooperate with each other that they could use in their future lives, such as in post-secondary schools, work, and community situations.

My Thoughts about BUILD Strategy Instruction
I have observed the Build Strategy program being successfully used in schools and in group-home settings with elementary, middle school, high school, and college students. I have no doubt that even adults in business settings could benefit from the principles taught in this program. David and Roger Johnson were our consultants on the Cooperative Thinking Strategy Series. In one brainstorming session during the development of the Build Strategy program, David suggested that we avoid the area of “debate” (which was our original intent). In a “debate,” of course, one side loses. Instead, he suggested setting up a situation in which both sides could “win.” It was great advice. From that conversation, we decided to concentrate on teaching students a strategy that would result in everyone on the team gaining knowledge about both sides of the topic and then making an informed decision. Our focus in the Build Strategy program became understanding and education rather than competition; as a result, students learn as much as possible about an issue from the perspective of both sides.

Indeed, during our pretest observations prior to teaching the strategy, observers watched students become invested in one “side” of an issue and often threatened to fight “to the death” to “win” the argument. In absolute contrast, after instruction in the Build Strategy, the posttest team sessions were not arguments. Instead, they represented a civilized process in which students listened and shared information about the pros and cons of both sides of an issue and eventually voted on a decision that was based on what they had learned instead of an emotional investment.

When I think about some of the adult decision-making discussions/arguments I’ve witnessed, I certainly realize that there were definitely times when everyone would have benefited from a peaceful BUILD-Strategy approach to resolving an issue instead of the “gang war” version of making a decision! This is a strategy that can be used by anyone at any age!

Teacher and Student Feedback on the BUILD Strategy
The results of the field test demonstrated that students who received instruction in the Build Strategy could work together more effectively to resolve a controversial issue than students who did not receive the instruction. Experimental students with and without exceptionalities examined an issue and defined the opposing sides, gathered information about both sides of the issue, discussed the consequences of decisions, identified possible compromises, reviewed the facts, made a personal decision, and conducted a team vote as to the best way to resolve the issue.

In addition, the Build Strategy was strongly endorsed by both teachers and students. Teachers commented: “Understanding others’ viewpoints, knowing there are processes that lead to peaceful resolution, and developing teamwork skills are all beneficial,” “The thing I liked most about the Build Strategy was the process that students were taught to follow. They need ways to organize thoughts into productive systems and solutions,” “This strategy filled a need in my class. The strategy was straightforward to learn and implement, logical in the approach to the area it addressed, and enjoyable for students to use. Integrating the SCORE Skills into all strategies has also been a very effective way to keep reinforcing these crucial behaviors,” and “The Build Strategy really forced students to use high-level thinking skills.”

Eighty-six percent of the students in our field test recommended that all fourth- or fifth-grade students receive this instruction. Comments from students included, “It really helped me make decisions easily. I like the way it is split up into different steps,” “I can use the Build Strategy for my life,” “The thing I liked the best was that I got to work with people I never worked with before and nobody was closed-minded,” “It helped me see both sides of an issue and not just pick the one that sounded better,” and “Most students do not know how to wisely make decisions. Using this strategy is good practice.”