Sheila Hostetter Martin
Nancy Hart Shepack
Edwin S. Ellis
Understanding written information depends on several factors, but one key factor is knowing the meaning of words. Knowledge of word meaning enables students to read their textbooks and succeed on tests in their classes, on state competency tests, and on college entrance exams.
This instructional program contains the information and materials for teaching the meaning of 101 vocabulary words commonly encountered on school achievement tests and college entrance exams. Each word is accompanied with a rhyming word, a picture that links the rhyming word to the meaning of the word, and a short story about the picture. By learning to recall these rhyming words, pictures, and stories, students across the country are improving their vocabularies and increasing their test scores on important exams. Research with more than 1500 students, in fact, indicates that students who participated in the Lexicons program increased their vocabulary scores between 32 and 39 percentage points! An explanation of how to use the program, handouts, black-line masters, pretests, quizzes, practice activities, and record sheets is included.
Prerequisites: Prior instruction in the LINCS Vocabulary Strategy or with the LINCing Routine is recommended but not required.

Research on the LINCS Vocabulary Strategy, the Strategy on which the Lexicons Program is Based

Overview
The LINCS Vocabulary Strategy is a strategy students use to learn the meaning of a new word. The effects of teaching the LINCS Vocabulary Strategy were compared to the effects of teaching the Word Mapping Strategy in this study. The Word Mapping Strategy is a strategy students use to predict the meaning of new words. The study included a total of 230 ninth graders in nine intact general education English classes. Students with disabilities (SWDs) and without disabilities (NSWDs) were enrolled in all of the classes. Three classes participated in each of three groups: the group receiving instruction in the LINCS Vocabulary (VL) Strategy (n = 6 SWDs, 73 NSWDs), the group receiving instruction in the Word Mapping (WM) Strategy (n= 10 SWDs, 69 NSWDs), and a comparison test-only [TO]) group (n = 8 SWDS, 64 NSWDs). Classes were randomly selected into the two experimental groups. The third group of classes served as a normative comparison. A pretest-posttest control-group design was combined with a pretest-posttest comparison-group design. 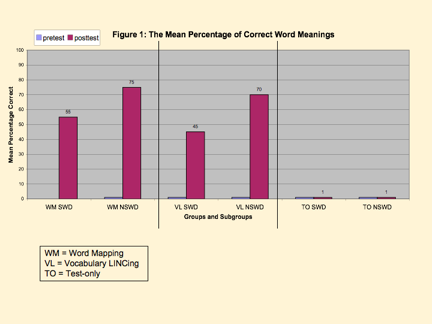 Figure 2 displays the mean percentage of points students earned on a test of strategy use. Students in the VL group took a test requiring use of the LINCS Vocabulary Strategy; students in the WM group took a test requiring use of the Word Mapping Strategy. With regard to the VL group whose mean scores are depicted in the bars on the right side of Figure 2, a significant difference was found between the pretest and posttest scores, Wilks’ Λ = .262, F(1,77) = 217.184, p < .001, partial η2= .738 (a large effect size). There were no differences between the SWDs and the NSWDs in learning the LINCS Vocabulary Strategy. 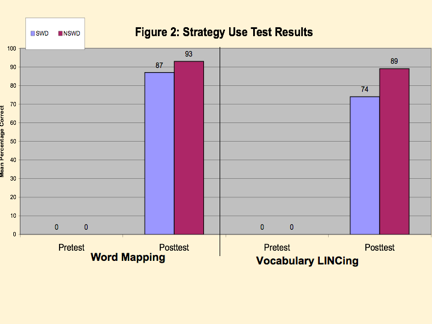 Conclusions
Students in ninth-grade general education classes were able to learn the LINCS Vocabulary Strategy and the meaning of words taught during strategy instruction at a high level of performance. The effect sizes in each case were large. There were no differences in performance between the students with and without disabilities.

My Background and Interests
Although I didn’t realize it at the time, my interest in learning and teaching began way back in 1965 at age 15. My youngest brother had been diagnosed with learning disabilities, and with both parents working 80+ hours a week, many of the responsibilities for his treatment fell on my shoulders. This was back when perceptual motor training to establish brain hemisphere dominance to cure LD was in vogue. I spent countless hours doing “angels in the snow” types of activities with him and trying to help him learn to read and write, although I was somewhat clueless about how to do it. His and my own emotional experiences led me to pursue college studies in the area of psychology, but becoming a teacher never crossed my mind. I accidentally fell into special education when an opportunity presented itself with a tuition grant to pursue a master’s degree in special education/learning disabilities. I didn’t have anything else to do, and it seemed like a way to extend my interest in psychology in a practical way. Only when I had my own classroom and became very invested in understanding my students did I realize that I was one of those people who was “born to teach”… and born to observe and think about learning. I’ve been hooked ever since!

During the late 1970s, due to my service volunteer experiences developing a pretrial diversion program for delinquent adolescents and working in a adolescent drug rehabilitation program, paired with my experience as a teacher of students with LD, I became the education coordinator for one of the Child Service Demonstration Centers (CSDC), which were federally funded programs charged with developing and validating interventions for students with LD. Our particular CSDC program focused on developing interventions for adolescents with LD who had been adjudicated (convicted). Of the many CSDCs that were funded, only a few focused on services for adolescents, and fewer still actually did anything to validate their effectiveness. One of these was a CSDC directed by Don Deshler, a new Assistant Professor at KU, and another one was directed by Naomi Zigmond at the University of Pittsburgh. Those of us concerned with the validation of our programs would meet at conferences to share what we were doing and our data. These were exciting times for all of us, and especially for me because I was collaborating with some brilliant people, and we were all trying to figure out what to do, how to do it, and how well it worked. Most of the CSDCs, however, failed to validate their interventions, so subsequent federal support shifted to funding five research institutes where learning disabilities could be addressed in a systematic, empirical manner, and interventions could be scientifically validated.

Dick Shieffelbush and Ed Meyen were awarded one of these institute grants, and thus the Institute for Research in Learning Disabilities (KU-IRLD) was born. Don Deshler, who was the Coordinator for the KU-IRLD recruited many of us who had been collaborating with him within the CSDCs to come to KU for doctoral studies and to work at the KU-IRLD (now known as the KU-CRL). That’s how I landed in Kansas, and that’s how I became a part of an effort to change education that continues today.

The Story Behind the Lexicons book
Like many Resource Room teachers of students with LD, I worked with a range of different general education teachers to monitor my students’ academic performance in subject-areas courses (e.g., to learn about up-coming assignments, what tasks my students were struggling with, their successes). One of the most common requirements of these courses was learning vocabulary – LOTS of it. I was aware of the rich amount of research about use of mnemonic devices to help students learn new information, and in particular, I was aware of the work of Drs. Margo Mastropieri and Tom Scruggs on providing students with visual mnemonic devices, developed by teachers, to teach vocabulary. As a teacher, my primary goal was to teach my students strategies that led to independence, but much of the mnemonic strategy research was about teacher-constructed mnemonic devices. I wanted my students to learn to develop and use mnemonic devices independently. I started to develop a set of instructional methods to teach students to do just this, and the LINCS Strategy was born. It enables students to use a variety of memory tools to help them remember the meaning of new words.

Later on, I realized that developing a resource for teachers and students on vocabulary terms that frequently appear on high-stakes tests would be helpful and would save them a lot of time. Thus, the Lexicons book was created by my coauthors, Sheila Hostetter Martin and Nancy Hart Shepack, and me that includes LINCS memory devices for many terms.

My thoughts about Learning Strategy Instruction
Most teachers of struggling students know that they tend to use very ineffective strategies for learning and are also very resistant to learning more effective and efficient strategies, so part of the challenge of teaching learning strategies is motivating students to learn and use them. Some learning strategies are a lot easier to learn than others; likewise, some provide more immediate and obvious “pay-off” than others. Thus, another reason I developed the LINCS Strategy was I needed a strategy that was relatively easy to learn and also one that students could immediately experience the benefits of using it in “real world” (general education) classes. Thus, many teachers select the LINCS Strategy as one of the first they teach students who are new to learning strategy instruction. When students experience the immediate and very real benefits, they tend to more readily “buy-in” to the concept of learning new strategies and are more amenable to learning those that are more difficult to acquire but also critical to use.

Teacher or Student Feedback on the Lexicons manual
Teachers and students have reported that the Lexicons manual is very helpful for students who are preparing for high-stakes tests. Students who have learned the LINCS Strategy can use it easily. Students who have not learned the LINCS Strategy can also use it easily after brief instruction on how to self-test. The obvious outcome of student learning of the terms in this manual is students’ almost immediate increased performance on tests. The not-so-obvious, but ultimately much more important impact is the effect that knowing how to learn vocabulary has on students’ sense of empowerment. There’s been a common theme among comments from a great many teachers and parents, as well as a few students… that is, they report that students often experience a transformation from being a victim of a hard test to an attacker of a hard test. It’s feedback about this attack-attitude transformation that thrills me the most about the impact of the LINCS Strategy.