Joseph B. Fisher
Jean B. Schumaker
Original research and manual by: Janis A. Bulgren, Jean B. Schumaker, and Donald D. Deshler
Often, students’ eyes glaze over when a teacher mentions abstract concepts like “democracy,” “photosynthesis,” and “integer.” Such “glazed” effects can be avoided by using the Concept Mastery Routine to help students analyze such concepts in a logical, non-threatening way.
At the heart of this routine is a form called a Concept Diagram. In partnership, the teacher and students use this form to analyze the characteristics of a key concept that are always present, sometimes present, and never present in examples of the concept. They also generate examples and non-examples of the concept, figure out a larger category to which the concept belongs, and create a definition for the concept.
This professional development program includes a written manual and a CD. The CD provides instruction and videotaped examples of teachers using each part of the routine at the elementary, middle-school, and high-school levels. It also allows teachers to design their own Concept Mastery Diagrams, save them, and print them out. The CD can only be purchased with a manual. To view a clip from the CD, click on the play button under the video box.

Overview
The Concept Mastery Routine is used by teachers to teach students about a new concept by relating it to a familiar concept. To test the effects of a CD program for instructing teachers in how to use the Concept Mastery Routine, a study was conducted with 8 general education teachers who taught grades 6 through 8. They were randomly selected into an experimental and a control group. Four teachers worked through this CD program (hereafter referred to as the “virtual workshop” [VW] group) to learn how to use the Concept Mastery Routine. They used the routine in their general education classes with a total of 76 students, six of whom had disabilities. Four teachers (hereafter referred to as the “actual workshop” [AW] group) participated in a live workshop to receive instruction from one of the researchers. These teachers used the routine with a total of 49 students, including five students with LD. The purpose of the study was to determine whether the virtual workshop experienced through the CD program was as effective as the actual live workshop. A multiple-baseline across-teachers design was used to determine the effects of instructing the teachers. A pretest-posttest control-group design was used to determine the effects of the teachers’ instruction on student learning. 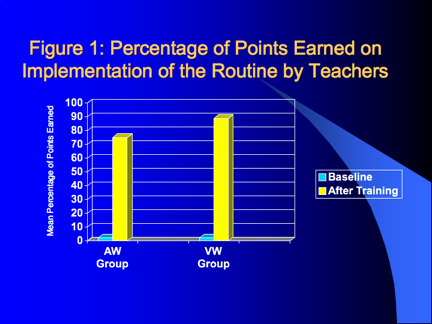 A Concept Acquisition Test was administered to students over a concept taught before the teachers were instructed and over a concept taught in the last observed lesson of the study. The test was comprised of open-ended items. Thus, students had to know the information and write it on the test, not merely recognize a correct answer in a list of multiple-choice items. 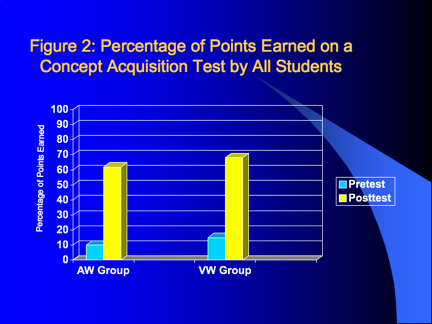 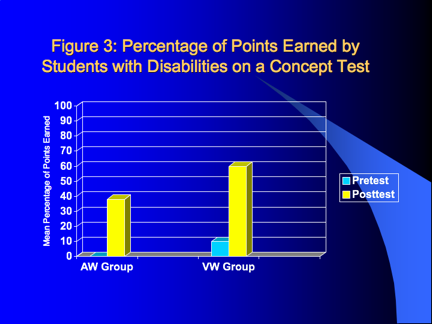 Conclusions
These results show that the Professional Development CD Program (the virtual workshop) is as effective as live instruction with regard to instructing teachers in how to use the Concept Mastery Routine. Both CD instruction and live instruction produced mastery levels of performance in the teachers and significant differences between their pre-instruction and post-instruction implementation scores. Furthermore, the CD Program appears to produce about the same levels of learning in students. Because the numbers of students with disabilities in each group were small, statistical tests between the groups were not possible. However, the students with disabilities who were taught by the VW teachers earned higher scores than the students with disabilities who were taught by the AW teachers. All students made significant gains from pretest to posttest, regardless of the type of training their teachers experienced.

References
Fisher, J. B., Deshler, D. D., & Schumaker, J. B. (1999). The effects of an interactive multimedia program on teachers’ understanding and implementation of an inclusive practice. Learning Disability Quarterly, 22(2), 127-142.