Jean B. Schumaker
Original manual and research by: Janis A. Bulgren, B. Keith Lenz, Donald D. Deshler, and Jean B. Schumaker
Every course of study has some key main ideas that are critical to understand. An example main idea for history is “Different geographical regions in the U.S. led to different ideas and disagreement, which led to the Civil War.” With the Question Exploration Routine as a guide, teachers begin the journey of teaching these main ideas by identifying critical questions for each course. These are not just any old questions, but they are ones that relate to main ideas that make the whole course worthwhile—the main ideas that students will actually apply in their current and future lives. Next, using a special graphic organizer called the Question Exploration Guide, teachers sketch out the key terms and supporting questions necessary to answer each question and eventually build a main idea answer. They also develop ways for students to explore the information further—both within the classroom and the world at large.
In class, the teacher uses the steps of the Question Exploration Routine to help students learn a process of higher order thinking skills that can be used to answer complex questions and explore main ideas. Finally, since the information on the Question Exploration Guides represents some of the most important information in a course, tests, quizzes, and assignments are constructed by the teacher to hold students accountable for knowing the information.
This professional development program includes a written manual and a CD. The CD provides instruction and videotaped examples of teachers using each part of the routine at the elementary, middle-school, and high-school levels. It also allows teachers to design their own Question Exploration Guides, save them, and print them out. The CD can only be purchased with a manual.

Overview
The Question Exploration Routine is used by teachers to help students arrive at the answer to a critical question. To test the effects of a CD program for instructing teachers in how to use the Question Exploration Routine, a study was conducted with 20 general education teachers who taught grades 4 through 12. They were randomly selected into an experimental or a control group. For the experimental group, ten teachers worked through this CD program (hereafter referred to as the “virtual workshop” [VW] group) to learn how to use the Question Exploration Routine. They used the routine in their general education classes with a total of 133 students, 33 of whom had learning disabilities (LD). Ten teachers (hereafter referred to as the “actual workshop” [AW] group) participated in a live workshop and received instruction from one of the developers of the Question Exploration Routine. These teachers used the routine with a total of 129 students, including 35 students with LD. The purpose of the study was to determine whether the virtual workshop (i.e., the CD program) was as effective as an actual live workshop. A multiple-baseline across-teachers design was used to determine the effects of instructing the teachers. A pretest-posttest control-group design was used to determine the effects of the teachers’ instruction on student learning in their classes.

Results
The teachers’ implementation of the Question Exploration Routine was measured before and after the instruction. The results are shown in Figure 1. The baseline scores earned by the two groups were compared using a t-test for independent groups. Results indicated no significant differences between the groups’ implementation scores at baseline [ t (18) = 0.23, p = 0.818]. The posttest scores of the two groups were also compared. Again, results indicated no significant differences between the groups’ scores [ t (18) = .55, p = .59]. The two groups of teachers implemented the routine equally well after their respective workshops. 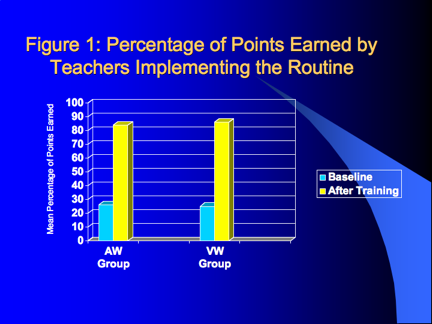 Figure 2 displays the mean percentage scores the two groups of teachers earned on a written test of their knowledge of the Question Exploration Routine. Repeated measures analysis of variance indicated that the posttest scores of VW teachers were significantly different from their pretest scores [F(1, 9)) = -520.26, p < 0.001], as were those of the AW teachers [F (1,8) = -484.21, p < 0.001]. An Analysis of Covariance (ANCOVA) revealed no significant differences between the posttest scores of AW and VW participants [F (1, 16) = 2.17, p = 0.16]. Thus, both groups of teachers gained about the same amounts of knowledge during their respective workshops. 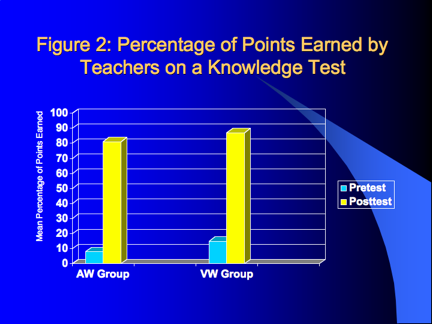 Figure 3 displays the mean percentage scores earned by the two groups of teachers when they completed a Question Exploration Guide, the graphic device on which the Question Exploration Routine is based. Repeated measures analysis of variance indicated that the posttest scores of VW teachers were significantly different from their pretest scores [F(1,9)= 164.0, p < 0.001], as were the same scores of AW teachers [F (1,9) = 180.0, p < 0.001]. An Analysis of Covariance (ANCOVA) revealed no significant difference between the posttest scores of AW and VW participants [F (1, 17) = 0.03, p = 0.864]. Thus, both groups of teachers were equally skilled at planning a graphic device for use with the routine after their respective workshops. 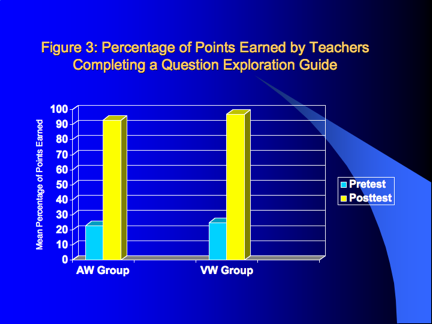 The test was administered at the end of each designated lesson. Results for all the students are shown in Figure 4. Results for the students with LD are shown in Figure 5. A Hierarchical Linear Model (HLM) analysis was conducted to test for differences in the posttest scores of the students in the VW classes compared to those in the AW classes. The HLM analysis was used to control for the dependency in the data due to many students having the same teacher (students nested in classes). In these analyses, the student pretest score was used as a covariate. The Kenward-Rogers method of computing degrees of freedom was used. The results indicated that the posttest scores of students whose teachers participated in the Virtual Workshop were significantly higher than the posttest scores of students whose teachers participated in the Actual Workshop, F(1, 14.7)= 5.99, p = .028. 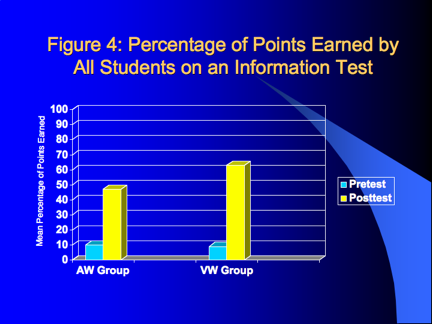 HLM analyses were also used to compare the scores of the groups of students with disabilities. Again, posttest scores served as the dependent variable and pretest scores as the covariate. Although visible differences were apparent in the graphs (see Figure 5), the statistical analyses revealed no significant difference between the posttest scores of students with disabilities whose teachers participated in the Virtual Workshop and those who participated in the Actual Workshop, F (1,15.4) = 3.01, p = 0.10. Students with disabilities made significant gains from pretest to posttest in each group: for the AW group, F(1,8) = 28.59, p = .0007; for the VW group, F(1,7) = 69.33, p <.0001. 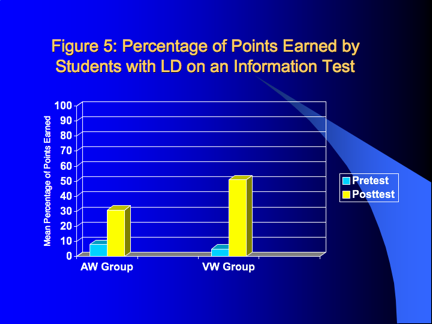 Conclusions
These results show that the Professional Development CD Program (used as the virtual workshop in this study) is as effective as live instruction with regard to instructing teachers in how to use the Question Exploration Routine. Both CD instruction and live instruction produced mastery levels of performance in the teachers and significant differences between their pre-instruction and post-instruction implementation and knowledge scores. Furthermore, the CD Program used by the teachers appears to be associated with significantly higher levels of learning in students than the live workshop. Although there were no significant differences between the two groups of students with LD, the students with LD who were taught by the VW teachers earned higher scores than the students with LD who were taught by the AW teachers. All students made significant gains from pretest to posttest, regardless of the type of training their teachers had. 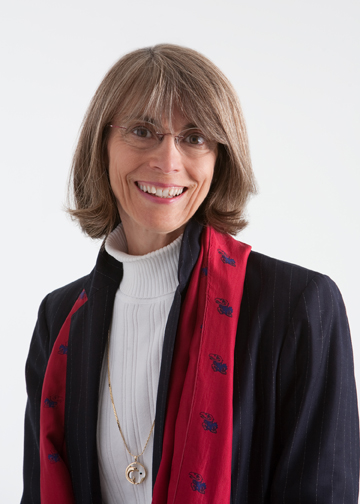 My Background and Interests
I grew up with a concern for children who need special help. One of my earliest experiences was organizing birthday parties for children with disabilities at the Matheny Medical and Educational Center in New Jersey. After the birthday parties were over and all the decorations had been cleaned up, I spent additional time with those children, putting them to bed, talking with them, and singing to them. Through those experiences and others as a camp counselor, I found that I loved being with children and teaching them. I decided that I wanted to be a clinical psychologist, and I went to college and graduate school with that goal in mind. However, along the way, I got hooked on research! I’ve worked with children in schools, group homes, camps, hospitals, and clinical settings. Across all those experiences, I’ve learned that all children can learn and can succeed. I’ve learned that if we hold high expectations for them and use special teaching techniques, they usually meet those expectations. I continue to do research with the goal of helping teachers teach and students learn.

My thoughts About Content Enhancement Instruction
Content Enhancement Instruction is one of the few types of instruction that has been shown to improve the performance of all types of students in secondary general education classes. The fact that teachers can learn to use one of the routines at mastery levels in about three hours of time either through a CD or in a live workshop indicates that this teaching method is practical to learn as well as effective.

Teacher Feedback on the Question Exploration Routine CD
Teachers were very positive about the CD program. They worked through it without difficulty and rated all the features of the program very highly. The results of the research on the CD program show that it is as effective as a live workshop in changing teacher planning and teaching behavior in the classroom. (See the research summary.)